Last week, Alan Johnson of The Rating Blog closed down his popular blog! From an outsider’s perspective this was a reasonably successful blog and really had all the essential marketing ingredients in it. The blog’s health index (Google: PR5, Alexa: around 100,000 at its peak, RSS Subscriptions: 12K plus) was not bad either and he had quite some followers, including yours truly.

Since Friday, I was pondering why one would stop blogging if it is passion for him/her or even career by choice? Well, I am not particularly talking about Alan and his blog here, but about the possible reasons that could persuade someone to call it quits, in the general context. I could already think of some valid reasons.

Reason #1: Lack of motivation and/or creativity or writer’s block, as mentioned in my last post, can be one of the major reasons behind the decision to stop a blog. Laziness and inability to read and research on a regular basis could be related arguments here.

Reason #2: The purpose and objective of the blog not met – Every blog, according to me, is started with a particular objective or many. 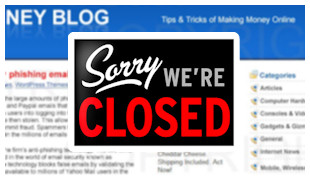 The purpose could be fame, goodwill, eagerness to educate the mass, regular income and so on. But if the blogger feels that the time and energy spent on the blog is not yielding enough return on the investment (ROI), he/she could think of discontinuing. Sometimes it is just that the message that the blogger is trying to convey, is not spreading the way he/she wants. In some other cases, the topic itself can become extinct or outdated if the blogger decides to take a break to set something else up.

Reason #3: The purpose of the blog already met: There could be genuine scenarios where the objective behind the blog is already met. Again, these goals could be the subject, money etc which when logically met, as per the targets set in the beginning; the blogger could think of taking a break.

Reason #4: Lack of time – This is the case with many bloggers who retire early. Due to other high priority commitments such as family, career, many would think of taking a break. Change in family status and change of job are definitely valid reasons and foremost at that. In some cases, it is even due to the fact that the technical upgrades, book keeping and marketing efforts of the blog takes way too much time than the actual time spent on blogging alone.

Reason #5: Forced exits – This is the most uncommon reason as the concept of blogging is not too old yet. Unfortunate situations such as physical or mental disabilities or even sudden death could bring a blog to an end. You must have read about Olive Riley, the oldest blogger ever, who passed away last month. Such unexpected exits, if due to natural causes, can be graceful sometimes but there are also cases where people are forced to stop for writing about illegal or banned content as well.

What is your opinion?

Stopping a venture is not exactly my favorite topic to write about. But I thought of doing so after seeing the goodbye message from Alan Johnson and I hope that he will get back to the blogosphere soon!

Now over to you – Have you ever got bored with blogging and even thought of quitting? If the answer is ‘yes’, do you have a valid reason to think so? Please voice your thoughts here.

Previous story :Just 2 much! Two tiny widgets to improve the reach and accessibility of your content

Next story :Launch your blog - Take your new blog to success in two months - Part VI

Another work from home job

In the last article in this category Vidya had talked about data entry jobs. Today’s topic is Virtual Assistance which is again something that can be done from the convenience of your home. Who is a Virtual Assistant? Virtual Assistants (VA) are freelancers who remotely provide administrative, office assistant or support services to those employers […]
Saving Bookmark this article Bookmarked

I had posted a short review on the Comment Kahuna (CK) blog commenting software a couple of months back. The Fast Blog Finder (FBF) from G-Lock Software is a similar product which helps you to search blogs of your interest and comment there from a simple window interface. Why comment on blogs? Improving the Google […]
Saving Bookmark this article Bookmarked

How do I attract more visitors or readers?

A lot of us create good blogs, maintain it regularly with good content and may be great at writing as well. But many times, these efforts go wasted, as we don’t necessarily get a good number of readers. Here are a number of basic tips related to increasing the ‘presence’ of your blog on the […]
Saving Bookmark this article Bookmarked

Bail Out Post Ideas to rescue you from Writer’s Block, Boredom or Lack of Time

Most of us go through writer’s block (or blogger’s block) many times in our blogging lives. If not for this issue, there may be still situations where you just don’t have enough time to come up with your blog post of the day in order to maintain your post frequency. One way to tackle this […]
Saving Bookmark this article Bookmarked

In fact, I was intending to write on a similar topic (’US ad expenditure trend‘) until I read this post from ProBlogger today. Basically he is talking about how to recession-proof your blog and I encourage all of you to read that post first (and excuse any duplication here, as I wrote this post in […]
Saving Bookmark this article Bookmarked

Earlier last month, I had posted an article titled 10 High-PR High-Traffic FREE article submission sites which was highly appreciated by a lot of readers. While article submission is a great way to improve traffic as well as backlinks, having active presence in certain forums guarantee all these benefits plus a lot more. In this […]
Saving Bookmark this article Bookmarked

The WordPress platform provides a number of feed subscription mechanisms for the blog readers. It exposes RSS, RDF and Atom feed formats for both blog posts and comments. For most practical purposes, it is good enough if your readers are able to find your default feed URL for posts that is permalinked like http://www.YourBlogDomain.com/feed. (This […]
Saving Bookmark this article Bookmarked

10 Most Annoying Ads and their irritating features

When I started this blog I had the kontera content link ads here. It was not like I was earning a lot of money from that but I was basically experimenting with almost all available ad options at that time – most of them with the intention of reviewing. After sometime, I also had a […]
Saving Bookmark this article Bookmarked

Many recent (and older) corporate HR surveys have revealed the fact that the salary is not the prime reason for most people for leaving a particular job or organization. Until recently, I believed that blogging is majorly inspired by the monetary benefits or the blog income but now I realize that I was wrong. There […]
Saving Bookmark this article Bookmarked

Blog Statistics that I Document and Track

You can probably call me a man of numbers and documentation! I have the habit of tracking every single (known) data point of my life documented and kept as several Microsoft Excel workbooks, Word documents, scanned images and other type of digital files. Sometimes this information goes to the granularity of daily transactions – you […]
Saving Bookmark this article Bookmarked

FrameBreaker Javascript to Deframe Your Site

Recently a blog reader of mine notified me about a Make money site (http://qooooo.com/) that is embedding 1000s of blogs and high traffic blog posts using frames. Basically, they claim to provide a search site but all that they do is to store a lot of good quality pages using tags and allow a tag […]
Saving Bookmark this article Bookmarked

A few weeks ago, when I (neatly) blended my Google AdSense 336×280 block a couple of paragraphs down the post content I thought I did a smart job! As a matter of fact, this was really resulting in an increased CTR (Click-Through-Rate) as well and a few readers like Hussein were interested in knowing how […]
Saving Bookmark this article Bookmarked

With the number of social bookmarking or social media sites growing day by day, it is becoming more and more difficult for the bloggers to track their bookmark accounts and links. Also, figuring out which all bookmark links to put on a blog or use on a regular basis are other issues. The bulk social […]
Saving Bookmark this article Bookmarked

Recently, I stumbled upon this little free tool to monitor your keywords, search phrases ranks in Google search results. It is called Google Monitor and it is developed by the same company (CleverStat) that developed PaRaMeter. I had reviewed PaRaMeter in one of my older posts that talked about free tools to check internal page […]
Saving Bookmark this article Bookmarked

Just like any other online marketer or blogger, I too have been obsessed with Google Pagerank of my domains. Good or bad, Google has been really successful in marketing this PageRank concept and got webmasters slog to keep their domains’ PR up (and not just ranking positions). In a way, that concept has helped many […]
Saving Bookmark this article Bookmarked

Earn money by participating in surveys

The latest trend, and an extension to making money by reading emails, is money via participating in online surveys. In both cases the alert to complete the money making action appears in your mailbox almost every day. The difference is that surveys pays you better (half a dollar to even $25 or $30) and in […]
Saving Bookmark this article Bookmarked

One of the key requirements to be successful at Affiliate Marketing is fast loading landing pages! Unfortunately, high-end VPS services are very expensive. Moreover, if you want to have dedicated IPs for each and every key domain that you hold, you have to shell out a lot of money. This is where Digital Ocean comes […]
Saving Bookmark this article Bookmarked

So you want to make $5,000 per month online out of your web content. Let us list your options. Build an authority blog or website that is updated regularly and monetized via Google AdSense, private ad sales and affiliate links – Traffic requirement will be in the range of one or two hundred thousand uniques […]
Saving Bookmark this article Bookmarked

Having completed your pillar posts and other initial setup, time has now arrived to do some search engine optimization (seo) for your site and its contents. We are not yet talking about doing the SEO using paid external services but more of how to seo yourself stuff and tips to optimize your blog to make […]
Saving Bookmark this article Bookmarked

Once you are an active publisher of ads, your main worry is to select ad or affiliate programs that are more profitable. At the end, the money generated via your blog depends on conversions or sales per user visits, page impressions or clicks. The ad or affiliate networks bank on time-tested compensation models to decide […]
Saving Bookmark this article Bookmarked
Next

Leave a comment Cancel
Comments to: Know when to stop blogging
Cancel reply